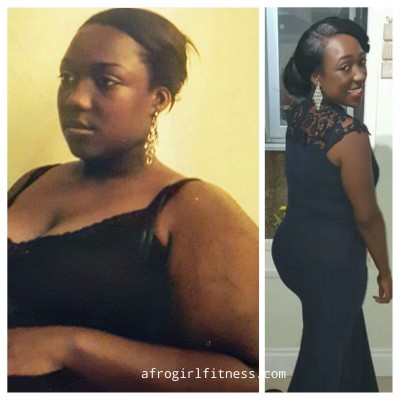 I thought that I would always be obese, actually I thought I was supposed to be fat due to genetics and the fact that I came kicking and screaming into the world as a 12lb baby. I always knew and accepted being over weight so the rude remarks from friends, family or even strangers on holidays cut deep but did not push me. I took on the persona of the ‘fat girl’ you know the one who is happy to make a fool out of herself or throw shade at herself in hopes that no one else would feel the need to point out my size because I had already made a point of out it. I smiled and laughed through it but my weight gave me such a complex that I believed I deserved less of everything.

By the time I was in my mid 20’s I was 5’2 and weighed over 259lb! I would get out of breath within a 2 minute walk, the inside of my thighs would flare up with pain due to the friction of rubbing together all the time, especially in the summer months and shopping for clothes was even more torturous. I tried a few ‘diets’ here and there but with no real commitment and of course none of them lasted long or even worked. Then one day a friend of mine came to visit me, she also had weight issues and battled with food. I looked at her and could immediately see something was different. I asked her and she explained that she had lost some weight. Something clicked that day! I decided I wanted to try. I decided that I was tired of accepting my weight. I guess seeing someone with the same struggles as me actually make some progress made me believe that it was also possible for me.

I went from 259lb to 183lb mainly calorie counting via myfitnesspal, I cut out all fizzy drinks, cut my portion sizes and water became my best friend. Yes, I lost a lot of weight at this stage but I still had a lazy attitude and my focus was purely on the calories instead of looking at my macronutrients and the process in a holistic sense. The truth is I still did not understand that losing weight and getting healthy were two separate things. My weightloss stalled and I was yo-yoing, relying on Slimma Tea to flush me out, it was a vicious cycle and I reached another stage of ‘sick and tired’. I began a new phase of my journey, which involved me researching what food I really needed to eat according to my goals, it was not just about calorie counting but understanding what I was putting in my body. Up until that point, I resisted any strenuous activity but then I noticed my body was not changing in the right way. I wanted to see how far I could push myself. How much weight could I lose if I combined healthy eating and exercise?

I bought my first at home workout DVD and it stayed on my kitchen counter in the plastic seal for about 3 months. Every day I would promise myself that I would start working out then one day, I pretty much forced myself to do it. It was 40 minutes of hell, I was so slow and could barely move. I was frustrated and could not understand why I struggled so much, even with the weight I had already lost. I think this rage spurned me on, I showed up in my living room every day to complete that DVD, what was hard started to become easy and I soon started to purchase more home workouts. In that time, I went on to to Hip Hop Abs, Insanity and a few other Beachbody workout programmes. This moved on to a love of running, classes at the gym and eventually learning to weight lift. This has been a very transitional journey, through each stage I went to research what I needed to do to craft my body.

Losing the initial weight saved me from a list of medical illnesses that were awaiting me but getting fit and working out has saved my life. There is not a word that could encompass how I feel about it. Not only has it helped to bring my weight down to 150lb but it has taught me so much, it has taught me how to set goals, how to be disciplined, how to focus and channel my stress. Instead of turning to alcohol which was my previous vice, I go and sweat it out instead. It has taught me the art of not quitting and focusing on the long road, we live in such a instant gratification/microwave world but exercise really teaches you how to be patient, work and wait for a process unfold.

Instead of turning to alcohol which was my previous vice, I go and sweat it out instead I’m sorry I did not lose 100lb in 12 months or anything miraculous like that. However I’m grateful for every phase of the journey, the highs and lows have given me the strength to keep going even when it has been really tough.

If someone asked me what losing 109lb has taught me:

– It is important to learn to love yourself right now because losing weight does not automatically equal self-love.

– Focus on being healthy instead of setting a goal weight.

– You do not have to feel guilty about putting yourself first

– Never quit before the magic happens.

I reflect back on some of the chances that I let slip by because I did not believe in myself and had no confidence. I never want to allow myself to be robbed of my own joy again and I just hope my story will encourage someone else to fight for their smile.